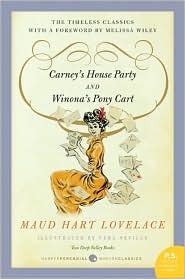 Two of Maud Hart Lovelace's beloved Deep Valley books join the Harper Perennial Modern Classics library, next to other enduring favorites like A Tree Grows in Brooklyn, To Kill a Mockingbird and Lovelace's Betsy-Tacy books. This beautiful combination edition of Carney's House Party and Winona's Pony Cart features a foreword by author Melissa Wiley and a never-before-published biography of Lovelace illustrator Vera Neville.

Carney's House Party: In the summer of 1911, Caroline "Carney" Sibley is home from college and looking forward to hosting a monthlong house party—catching up with the old Crowd, including her friend Betsy Ray, and introducing them to her Vassar classmate Isobel Porteous. Romance is in the air with the return of Carney's high school sweetheart, Larry Humphreys, for whom she's pined all these years. Will she like him as well as she once did? Or will the exasperating Sam Hutchinson turn her head?

Winona's Pony Cart: More than anything in the world, Winona Root wants a pony for her eighth birthday. Despite her father's insistence that it's out of the question, she's wishing so hard that she's sure she'll get one—at least, that's what she tells her friends Betsy, Tacy, and Tib. . . .